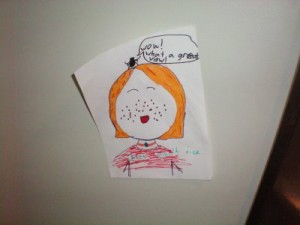 I’ll admit it. I don’t like bugs. If there’s one in the house and my kids are around, I’ll take a deep breath, tell them that all of nature counts, and gently put it outside. If they aren’t nearby, I’ll smash it to smithereens with the nearest large object I can find. Either way, it makes my butt pucker. So imagine how I reacted when the school nurse called. Lice. Eww. Plus a bleggh. Let me be clear. I am not the kind of parent whose children get lice. That honor is reserved for other people, and I admit it, until recently, I judged them. It must be their fault. Bad. Bad parents. Then, without any warning, I was inducted into the Nit Picking Club. Intellectually,  I know that lots of kids get lice, and intellectually, I know that it has nothing to do with  whether I did my dishes or what income bracket I fall in or if I let my daughter skip her bath because we got home late from gymnastics. But when I went to the school to pick up my kids, I still felt like everyone was staring at me. And that’s because they were. Apparently, one of the little boogers in my daughter’s hair lots its grip and tumbled to its death on a desk. Another student saw it. And gasped in horror. My daughter crumbled in humiliation. I dutifully picked the kids up and headed off to the grocery store for some of that shampoo. The shampoo part is the easiest. It’s the combing part that gave me the willies. I took a deep breath, calmly explained this was no big deal, and tried not to cringe as I picked nits out of my daughter’s hair like I was a chimpanzee. Then it was my son’s turn. For those of you who have yet to experience the joy of this, I would highly recommend getting some generic shower caps to keep on hand – you need them so the shampoo can sit and do its thing. I’m not sure which traumatized my son more, the lice, or the Strawberry Shortcake shower cap I forced him to wear. The sheets were washed. The stuffed animals were fumigated. Brushes were boiled.  My hair was treated just in case. And I learned that this whole disgusting thing is actually pretty darn common. Did you know there’s actually something called Headlice.org? Not sure I’d ever want to brag about my association with that group, but according to them, September is Head Lice Prevention Month. Now that’s a cause I can get behind. If their efforts aren’t 100 percent successful, and you someday find yourself boiling brushes, just know that you’re in good company. Scratch. Scratch. Scratch.